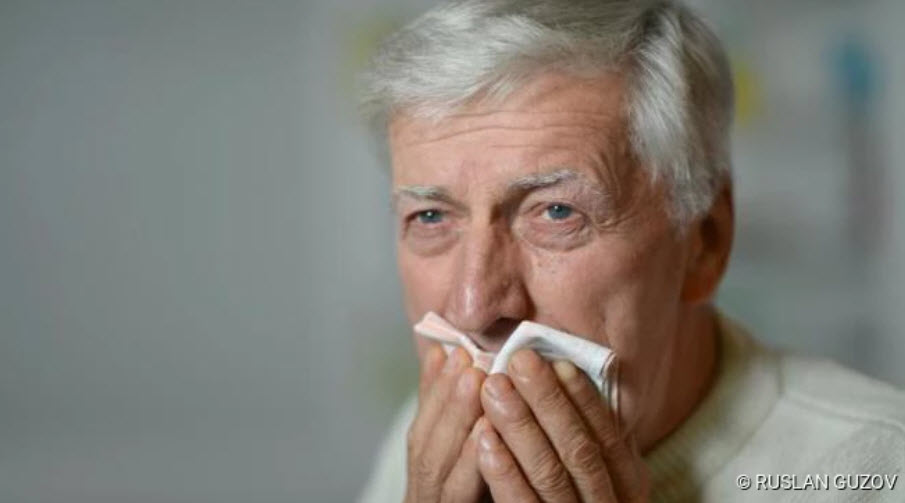 Diphtheria is an acute bacterial infection. It mostly affects the upper respiratory tract, especially the mucous membrane of the throat.

The triggering bacteria are transmitted from person to person by coughing, sneezing or speaking (droplet infection). Once they have settled in the pharyngeal mucosa, they begin to produce a toxin. This poison is responsible for the diphtheria symptoms such as sore throat and fever. It can also spread further in the body and damage the heart and other vital organs. Doctors call this a toxic diphtheria. In such cases – and if the disease is left untreated – life may be in danger.

The disease can be prevented with a diphtheria vaccination. Since the vaccination was introduced, the number of new cases has fallen sharply. Nevertheless, local epidemics often occur, as people repeatedly fail to be vaccinated.

The period between infection and the onset of the disease (incubation period) is relatively short: the first diphtheria symptoms appear as early as one to five days after infection.

The complaints usually begin in the throat. The poison produced by the bacteria causes the mucous membranes to swell. This leads to sore throat, difficulty swallowing, fever and a general feeling of illness. The neck is usually also visibly swollen from the outside. In addition, there is hoarseness, coughing and swelling of the lymph nodes.

Whitish yellow coatings form on the almonds. They are called pseudomembranes and are a sure sign of diphtheria for the doctor. The plaques can spread to the throat and/or the windpipe and nose. If you try to remove it, the mucous membrane underneath starts to bleed.

Throughout the entire duration of the disease, a sweetish, foul bad breath occurs.

It becomes dangerous when the disease spreads to the larynx. The mucous membranes swell here as well. This swelling initially leads to a barking cough (the so-called Krupp cough) and to hoarseness. If the swelling increases, breathing may become difficult. At this stage the disease is life-threatening!

In rare cases, the bacterial toxin spreads as far as the internal organs. Then symptoms such as cardiac arrhythmia, paralysis in swallowing (if nerves are affected), pneumonia, kidney or liver failure can lead to death.

If the bacteria get into an open wound, ulcers can form, the skin or wound diphtheria.

In children and infants, the nasal mucous membrane is also frequently affected. In such cases a bloody or purulent discharge from the nose occurs.

In the early stages diphtheria can be confused with tonsillitis, laryngitis or pseudo croup.

Diphtheria is caused by the bacterium Corynebacterium diphtheriae. It forms a poison in the body, the so-called diphtheria toxin. This damages the mucous membranes and destroys the body cells.

The infection occurs from person to person, usually in the form of a droplet infection (coughing, sneezing, speaking). Even before the onset of the first diphtheria symptoms, those affected are contagious and can therefore pass on the pathogen to other people.

In diphtheria, a distinction is made between the suspected diagnosis and the actual diagnosis:

The doctor makes a tentative diagnosis based on the symptoms.

For an actual, reliable diagnosis, the diphtheria bacterium must be detected. To do this, the doctor takes a smear with a cotton swab from the throat or nasal mucous membrane. This smear is examined in the laboratory for the pathogen and its toxin. However, the results are only available after twelve hours. That is why the doctor often starts therapy as soon as diphtheria is suspected.

The patient receives an antidote to the diphtheria toxin (diphtheria antitoxin). This neutralizes the poison that is freely present in the body, thus rendering it harmless. However, the antidote cannot do anything against the toxin that is already bound to body cells.

The diphtheria bacterium is directly combated with antibiotics. The antibiotics are usually administered over ten days. The aim is to stop the reproduction and poison production of the pathogen. The most commonly used antibiotic is penicillin.

Another important treatment measure is bed rest for at least four weeks.

Immediately after the diagnosis, those affected are isolated, i.e. they are put into quarantine. Only people who have sufficient vaccination protection may then still come into contact with the patients.

All persons who had contact with the patient before the quarantine are also tested for diphtheria. In most cases, you will receive an antibiotic as a precautionary measure (prophylaxis). If the contact person is not vaccinated, the vaccination is carried out immediately.

Diphtheria: course of disease and prognosis

The prognosis for diphtheria depends on two factors: the stage at which diphtheria is detected and the general health condition of the person affected. If therapy is started early, the prognosis is good and patients can usually be cured completely.

However, the disease can also cause various complications that also influence the prognosis. In severe cases of illness, patients can die, for example, from heart failure or suffocation.

In general, about five to ten percent of all those affected die from a diphtheria infection. Mortality is lower in countries where medical care is good. In areas with poor medical care, such as many developing countries, the mortality rate for diphtheria is considerably higher.

Plantar warts: Recognizing and treating warts on the foot